The ACEA B4 performance requires an outstanding detergent/dispersant power and a better viscosity increase resistance due to soot produced by Direct Injection Diesel engines (except VW unit injector engines that require a VW 505 01 product such as MOTUL Specific 505 01 502 00 5W-40 or 8100 X-clean EFE 5W-30 or 8100 X-clean 5W40).

The MERCEDES MB 229.5 standard is more stringent than 229.3 in terms of ageing and oil film resistance (extended drain interval: on-board computer), detergent/dispersant power (ACEA B4) and requests fuel economy performance: 1.7% fuel economy improvement versus a 15W-40 reference. The specification MB 229.5 applies to all MERCEDES Gasoline engines, including AMG (in 5W-40 viscosity grade) except SLR, and to all MERCEDES Diesel without DPF engines.

The specification MB 226.5 is similar to 229.5 and applies to MERCEDES Gasoline engines sourced from the MERCEDES/RENAULT-NISSAN partnership.

The PORSCHE A40 standard requires extreme high shear resistance from the lubricant. This specification applies to all PORSCHE engines, except Cayenne V6 and Diesel versions (for these specific engines, use an approved Porsche C30 lubricant such as MOTUL 8100 X-clean+ 5W-30).

PSA has developed B71 2296 standard in order for the oils to provide high thermal stability and ensures an outstanding resistance at high temperatures to avoid black sludge and viscosity increase that soot, coming from combustion residues, may create.

PSA B71 2296 specification is suitable for some PSA Gasoline and Diesel engines requiring this standard: Always refer to the recommendation of your service booklet.

RENAULT has developed RN0700 and RN0710 standards for oils able to endure the most severe thermal constrains along with modern after treatment systems compatibility. 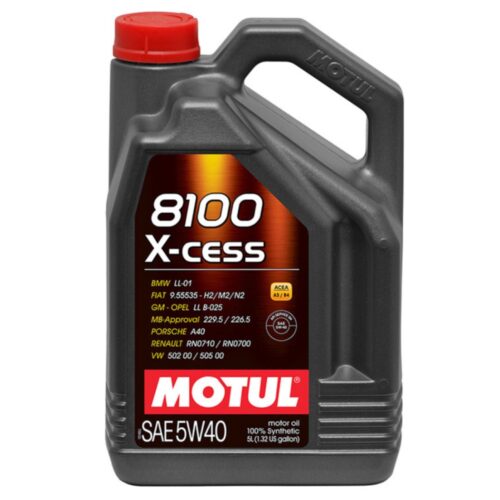